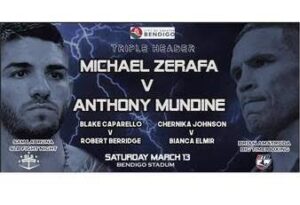 On March 13th, Michael Zerafa will step back into the ring with veteran, Anthony Mundine.

Both Mundine and Zerafa will be returning after a fourteen month absence from the ring, with both men last fighting in December of 2019.

I spoke with Zerafa about the fight and he said, he is expecting fireworks.

“You can’t count Choc out, you can’t buy his experience”.

In justification for the fight, Zerafa said that the fight will move him up the ranks of the middleweight division for the WBA. With the goal being a title shot at the WBA Middleweight championship which is currently held by Ryota Murata. He also added that the other potential fighters in Australia aren’t experienced enough for Zerafa as they are only 10-15 fights into their careers, as Zerafa is a 34 fight veteran with international experience. 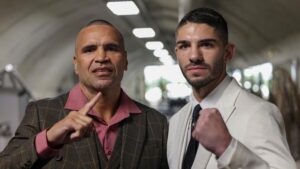 Zerafa went on to speak about his potential future fight with Tim Tszyu talking about the low offer he received from the Tszyu team and how Zerafa believes that may the best man win.