UFC 247: Jones V Reyes Could this be a big Mismatch?

Is the UFC struggling to make superstars as some fights off late have been mismatches on paper and in reality, and the main event for UFC 247 feels like it could be the biggest mismatch I have seen in the UFC for some time.
I decided to take a look at the odds for the fights on the main card at UFC 247 and Jones is an odds on Favourite with 11/50 and I have seen some places giving him a price around 2/9 on, while Reyes comes in at 17/5 and roughly the same in other places so basically just over 3/1, so as far as the bookies are concerned Reyes has no chance.

When we look at Reyes UFC record he has only fought six times within the UFC and it appears the only name that stands out is Chris Weidman but this wasn’t the top of his game champion Chris Wiedman, this was the Wiedman who had lost five of his last last six fights including the one against Reyes. The question here, is can Reyes really be ready for a fight against one of the pound for pound champions ever to grace the UFC. I know they say anything can happen in the UFC and upsets do occur but I really just don’t see it going down like that. Would it not have been better for him to fight one of the other three people ranked above him.

Jon Jones hasn’t been as active as I am sure he would have liked to have been since returning to the UFC in December 2018, but as soon as he came back it was business as usual, winning the UFC Light Heavyweight belt against Alexander Gustafsson then successfully defending the belt twice in 2019, against the #3 ranked fighter Anthony Smith and then against the #1 ranked fighter Thiago Santos so you can see why he is now fighting #4 ranked fighter Dominick Reyes, as #2 wasn’t an option for Dana White as it is Daniel Cromier who has moved up to Heavyweight. The big question for Jones if he wins this fight will be, what is next for him as it appears there really ins’t anyone left to fight at Light Heavyweight division so will he make the move to Heavyweight or will he just say he has had enough and retire.

Tickets can be bought for the event by going to https://www.axs.com/events/389322/ufc-247-tickets?q=ufc&gclsrc=aw.ds&

Looking at the rest of the Card, there appears to be another mismatch with the co-main event as Valentina Shevchenko is a big favourite to beat Katlyn Chookagian even though Chookagian is the #1 ranked fighter.
Then it is always interesting in watching Derrick Lewis fight as you never know what is going to happen or what he is going to say after the fight. 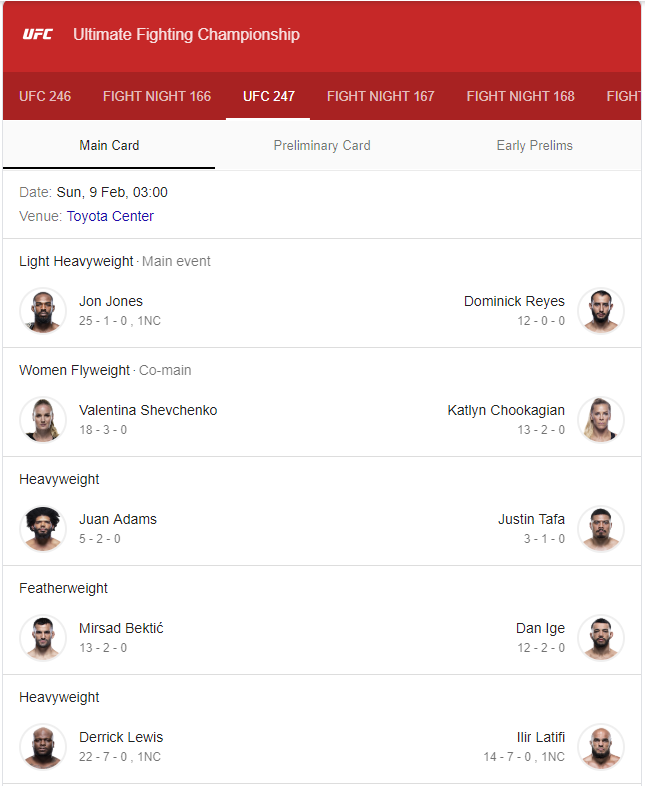