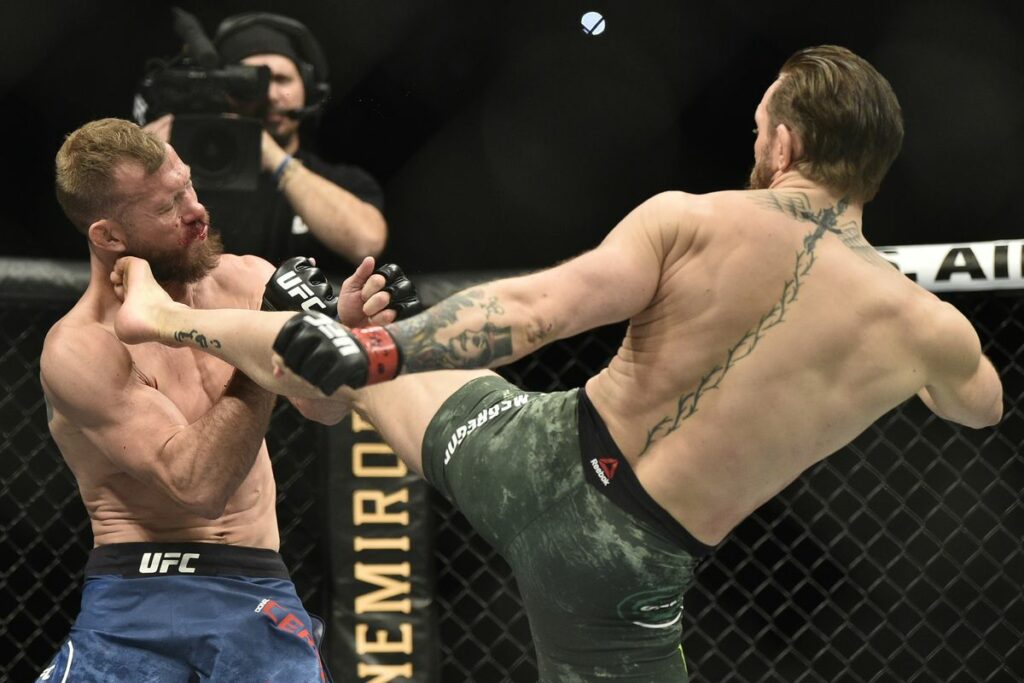 The new humble Conor McGregor made light work of Donald ‘Cowboy’ Cerrone in UFC 246, getting him out of there in 40 seconds or so. Maybe McGregor has been watching Jorge Masvidal as he came out a through a big left hand but Cerrone was quick to dodge it and then while the two fighters locked arms McGregor started using an Un-Orthodox approach by hitting Cerrone a few times with his shoulder, and breaking his nose from it. When they came out of the clench Cerrone backed up to the cage and tried a quick head kick but McGregor blocked it and return a high head kick of his own, and that was the beginning of the end for Cowboy, as Conor plied the pressure and rained down the punches all Donald could do was cover up, it then wasn’t long until the ref called off the fight.

The bigger question is now who is McGregor going to face next and when as there is a number of fighters from MMA and Boxing who might be interested in taking him on.
First option is a rematch with Floyd Mayweather Jnr as McGregor tweeted a made up poster for the second fight before his return to the UFC, but realistically Mayweather will decide this one and personally I can’t see it happening as the first fight wasn’t as good a specticale as people were hoping for.

Second option could be Boxing Manny Pacquiao, and Manny sent Conor a message saying he would be interested in a fight. Although I think this is more realistic than boxing Mayweather Jnr I don’t think Dana Whites wants McGregor away from the UFC as he has just got one of his biggest stars back. So this means he will fight someone in the UFC and what options are there.

Well there is a good few names lining up for a big pay day, rematch with Khabib Nurmagomedov but that will only happen if Tony Ferguson gets injured but as this fight has been put off four times I think Khabib and Tony really want it to happen this time in April, so then there is another rematch but this time against Nate Diaz for the decider third fight, and although Conor says he wants a third fight, personally I don’t think it is the right time for that fight.

So now there is only two more people left I can realistically see a fight being made with, Kamaru Usman the current Welterweight Champion, but I don’t think Dana White could make this fight now as McGregor is only ranked 14th so there would be a lot of disgruntled fighters above if so the only fight left to make would be against the holder of the BMF Belt or otherwise known as the Bad Mother Fucker Belt, which is a novelty belt but held by Jorge Masvidal.

For me the BMF Belt fight is the only logical fight, it will create a massive event, it wont upset any of the other fighters as it isn’t a real title fight so basically it is a win win for everyone and both fighters are eager for the fight. I just wonder if we will see a respectful and humble McGregor again at the next press conference.