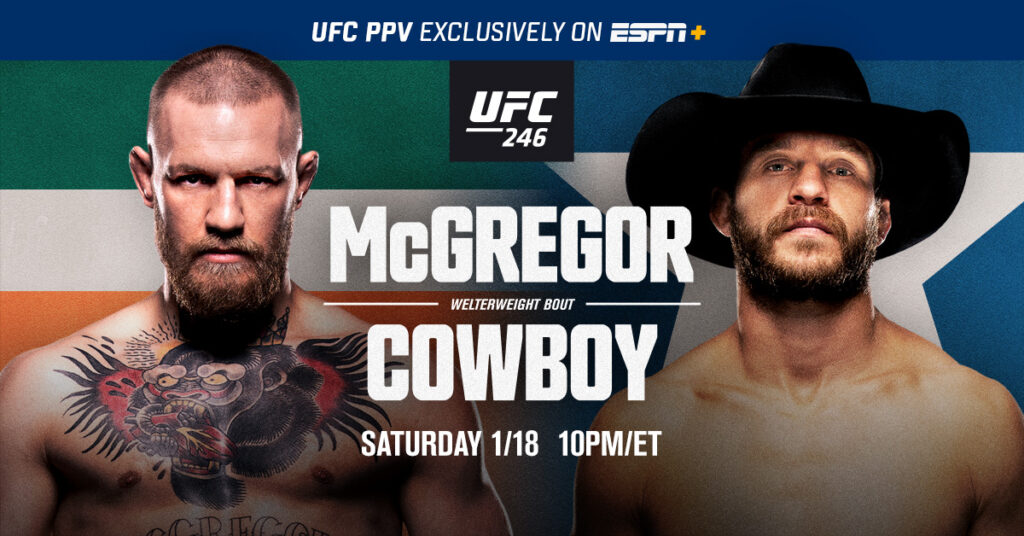 Conor McGregor (21-4-0) finally makes his return the UFC platform after another long lay off, this time though it hasn’t been as long of a lay off as previous but still it was just over a year out of a competitive fight and you would assume he has still been training in that time off. This time he is coming off the back of a hard fight and loss to Khabib Nurmagomedov where he was outclassed and made to submit with a rear naked choke and some people will be questioning McGregors time in the UFC if he loses this fight to the Cowboy.

The big question will always be what type of McGregor are we getting, as he has had his troubles away from the UFC with court cases and distractions with trying to expand his own brand or other businesses he has set up, so will he be 100% committed to the sport. Due to his long lay offs he kind of needs to work his way back up into a title fight contention and although he is still regarded as a star it appears he can’t just pick and chooses his fights like what he did before.

In the press conference we had a completely change of character to what we are all used to, although he was confident in his own ability and Mystic Mac predicted a win by KO, there was zero trash talk and he was completely humble and respectful to Cerrone which I don’t think we have ever seen from him before, I have heard rumours that he is trying to change his well being and character by looking after his body better, and he did mention in the Press Conference how he went back to his old boxing gym to perfect his boxing skills and brought more people into his camp to try and make it the best camp he has ever had.

Some people feel like this is just a front to get himself back into the UFC to generate some more money and given time the mask will slip, I for one hope that isn’t the case for as funny as the trash talking is some times it feels a bit cringe and it looks even worse when he doesn’t back it up.

His opponent is UFC veteran Donald Cerrone (31-13-10), who has been a mainstay for the UFC since his debut in 2011 and a fighter who appears to be respected by everyone in the corporation. People would say he is nearing the end of his time with the UFC given the fact he is 36 years old but he currently holds the most victories within the UFC with 22 and most fights in the UFC with 33 and you know what they say about wily old pros, they have seen it all so they know all tricks and maybe Cerrone has seen enough to be able to deal with McGregors main weapon which is his power and if you can take that there is always a chance to take it to the ground and win some rounds.

it is hard to call this fight as there is if’s and but’s linked to it for both fighters, with the inactivity, age factor, but I will go out on a limb as say I think it will be a close fight with McGregor shading it on points, as I feel Cerrone will be able to take his power and he will come back at him with his own weapons.