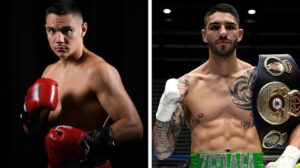 The most anticipated Aussie grunge match between Tim “Soul Taker” Tszyu 18-0 (13kos) and Michael “Pretty Boy” Zerafa 28-4 (17Kos) dubbed “A day of Reckoning” will take place at the Newcastle Entertainment Centre, on July 7, 2021.

Zerafa and Tszyu traded words during the press conference as Zerafa claimed that if is name was Tim Smith no one would care you he was (similar to Jeff Horn’s comment at the Horn v Tszyu presser last year) and Tszyu claiming that Zerafa will be his next victim.

While no official betting market is available for the fight as yet, one would think that the early advantage would go to Tszyu considering his undefeated record and his three fight knockout streak, while Zerafa )despite having a easy one round stoppage victory over Anthony Mundine in March 2021) is coming off a long layoff and loss to Jeff Horn in December of 2019.

The fight is two years in the making and is the most anticipated bout of 2021, with the winner expected to challenge the winner of Liam Smith v Magomed Kurbanov that happens this weekend May 8, for the number one contender spot for the WBO Super-Welterweight World Title.

I personally can’t wait for this bout as it’s been 2 years in the making, and I’m expecting a war similar to Horn v Zerafa 2.

The event will be televised on Mainevent TV (channel 521) on Wednesday 8 July 2021 from 7pm AEST.