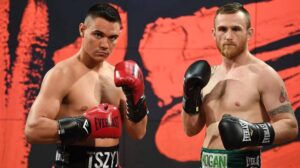 Hogan is a two time and division world title contender and is a significant step up for Tszyu and definitely a step in the right direction for a world title fight.

In 2019, Hogan challenged then WBO Super-Welterweight World Champion, Jaime Munguia. After the twelve round fight, a controversial decision was given with Hogan losing the fight and many feel that a robbery took place. Later that year, Hogan again challenged for a world title, against Jermall Charlo for his WBC Middleweight world title, Hogan was again defeated by a seventh round stoppage. Despite these two loses, Hogan’s resume is far more advanced then Tszyu’s.

Tszyu has easily destroyed his last three opponents in Jack Brubaker, Jeff Horn and Bowyn Morgan, but Hogan is on a much higher level then any of those opponents in the Super-Welterweight division.

Early predictions are that Tszyu will come in as the heavy favourite in this fight as on Sportsbet.com Tszyu is $1.18, while Hogan is blown out to $4.80.

As far as I’m concerned it’s a fifty-fifty fight.

The fight will take place at the Newcastle Entertainment Centre, in Newcastle, New South Wales, on March 31 to be broadcast on Foxtel Mainevent Tv, channel 521.

The undercard and price for the fight will be released closer to the fight.

Here’s a link to the press conference and my and Tstreet’s thoughts on the fight.