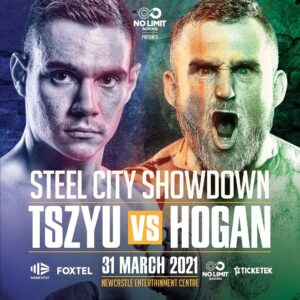 Despite looking a little amateurish in the first two rounds and a head clash that cause a bad cut above his right eye, Tszyu made it look easy against Hogan. Once he found his rhythm, Tszyu used devastating body shots that took a massive toll on Hogan and Tszyu gave Hogan an uppercut for the ages that almost knocked his head off in the fourth. To Hogan’s credit he survived the round, but Hogan’s trainer Stephen Edwards threw in the towel in the fifth to give Tszyu another Tko victory.

So who now for Tszyu??? On the domestic level there’s no one left, it’s time to go overseas. In the post-fight interview, Tszyu indicated that he wants to fight in Newcastle again with the crowd chanting “Tszyucastle!”, but I find this very unlikely if he wants to fight any of the top world ranked contenders.

Jack Calcay, Liam Smith, Erickson Lubin, even Sebastian Fundora are possible contenders for Tszyu. With the scope of the WBA 154lbs champions changing a WBA World Title shot is looking more liking for Tszyu as despite being the #1 ranked contender for the WBO title currently held by Brian Castano. Castano is entering into an undisputed bout with Jermell Charlo, who holds all the World Titles at Super-Welterweight, WBC, WBA (Super) IBF and Ring. Tszyu could have to wait up to a year for a shot at the WBO Title.

With Tszyu continuing to improve every fight, it’s in anticipation that we wait to see what he can do on the world stage, but for now that world stage is on notice.

Here are Tstreet’s and my thoughts on the fight itself with a full wrap of the Tszyu v Hogan fight and what’s possibly next for Tszyu.