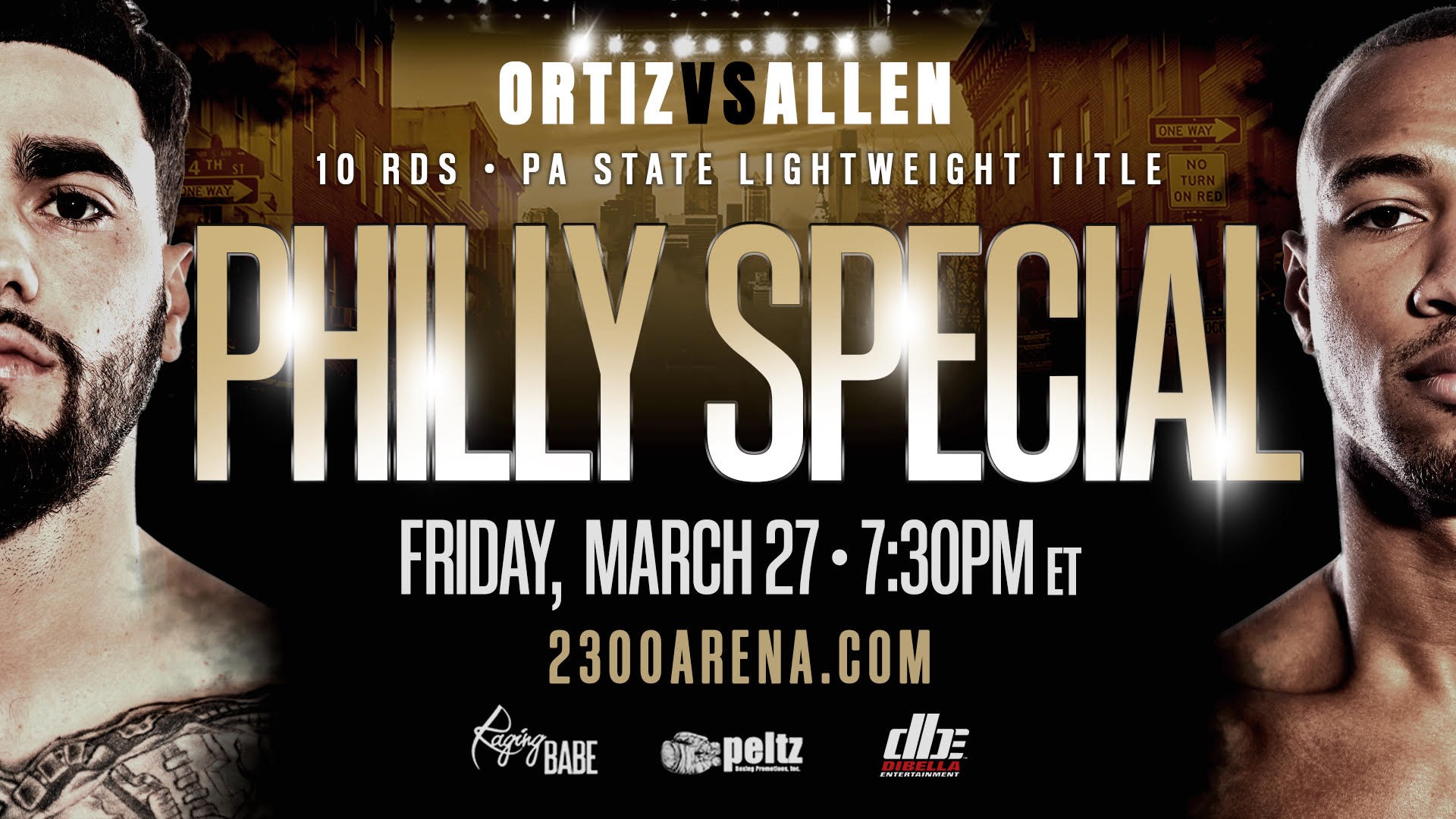 PHILADELPHIA, PA — It should be another all-Philly classic when lightweights Stevie Ortiz and Damon Allen collide over 10 rounds for Ortiz’ Pennsylvania state lightweight championship on Friday evening, March 27, at the 2300 Arena.

The Ortiz-Allen showdown will headline a seven-bout card dubbed Philly Special by Raging Babe, aka Michelle Rosado.  First fight will start at 7:30 p.m.

“The recipe for success in Philly always has been Philly vs. Philly,” said Rosado.  “It’s what made Philly a great fight town. The hard part today is getting Philly fighters to fight each other so I’m thankful that Steve Ortiz and Damon Allen bought in.

“This fight is happening at the right time for both of them.  The winner can break into the world rankings.”

Ortiz won the vacant state 135-pound title last year when he scored a pair of knockdowns en route to a unanimous eight-round decision over another Philadelphian, Jeremy Cuevas, at the Met.

The recipe for success in Philly always has been Philly vs Philly. It’s what made Philly a great fight town. Stevie Ortiz vs Damon Allen is happening at the right time. The winner can break into the world rankings. #phillyspecial #boxing pic.twitter.com/coMdDX4S0h

A pro since 2015, Ortiz is 11-0, 3 KOs, and he has boxed only two men with losing records.  Ortiz is managed and trained by Chino Rivas and promoted by DiBella Entertainment.

“It’s a big fight because we are both very talented,” Ortiz said.  “It will draw a lot of attention because of our amateur backgrounds.  A lot of people always wanted to see us fight.

“As amateurs, Damon was always the top guy in his division.  I was the top in my division. We went to the National Golden Gloves together and we fought great fights.  This match-up is going to bring the best out of us.”

“This is a great opportunity for Stevie Ortiz in a hometown, Philly Special main event against Damon Allen,” said Lou DiBella, President of DiBella Entertainment. “This is reminiscent of the great Philly fights of old. The card is stacked and will be a great representation of Philly boxing and the best of local shows. I look forward to working with Raging Babe to secure a television or streaming partner for the March 27 Philly Special. Philly Special will be special and I can’t wait for fans to see it.”

Allen, 27, last boxed Oct. 25 at the 2300 Arena when he scored a unanimous six-round decision over Dieumerci Nzau, of Silver Spring, MD.  That marked Allen’s first fight in his hometown in more than four years.

Allen is managed by Tim VanNewhouse and David McWater, and he is trained by Brian McIntyre.

“I never wanted to be the best in the city; I want to be the best period,” Allen said.  “I know he’s looking at it like it’s a big fight. This isn’t my first rodeo in a fight like this.  I know what to bring and what not to bring. My mind is straight. He is going to be game.

“I have more experience in and out of the ring.  He’s just another fighter in front of me. I live a boxing lifestyle.  I told him to ‘come ready and prepared’ because I’m coming 110 percent.”