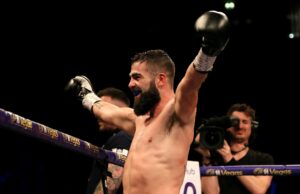 So, this is the last Joe’s Take…

After 2 and a half years, and many many mornings wondering whether fighter x has had 26 knockouts or 27, this will be my last article.

At least for the time being.

And there is almost something poetic in my last prediction being pretty much the same as my first.

That sounding a lot better than “both were completely wrong…”

My first, if I remember rightly was Dmitry Kudryashov vs Yunier Dorticos in September 2017, and to be honest on a re-read it was as boring as it was wrong.

At least with my new articles if they are completely inaccurate, they are at mildly least entertaining.

Despite picking Quigg by 4th round TKO, the fight between Quigg and Carroll did play out as I thought in ring geography, with Carroll looking to box as Quigg walked the Irishman down.

Or attempting to walk down.

If I were to go down the list of things that I got wrong in the prediction, I’d probably start with the sharpness of Carroll. Having 3 knockouts in 17 didn’t do Carroll justice on Saturday. He wasn’t no Tank Davis, but after 2 rounds I was reassessing what I said in the pre-fight in that Quigg could simply walk down Carroll and land his own shots.

Firstly, there was the sharpness in the shots, and secondly, I hate using the term, but the southpaw angles were really bothering the Bury man. Being far more fluid than Quigg, Carroll could jab, dip down and throw a left uppercut, or throw a right hook and pivot off to the right, and Quigg despite never really being a slick boxer looked more limited than I’ve ever seen him.

He simply couldn’t adapt to the foot speed and variety in Carroll’s work, and combining this with Carroll being able to hold his own on the inside swapping body shots there just didn’t seem to be any area where Quigg seemed to hold the advantages.

It’s something that I had noticed in a lot of his past fights, the abandonment of the jab, and his willingness to act as a bit of a blunt instrument, more of a Jarrett Hurd than a Canelo in terms of getting inside, but it was his physicality and stamina that always got himself out of trouble.

But in against Carroll he just simply didn’t have enough of these physical advantages to overcome the skill and speed gap.

Carroll made Quigg look far older than his 31 years, but as I said I think the limitations were always there for Quigg, I just didn’t expect Carroll to be the one to exploit them.

And if that is the case, you have to start to think that Quigg should retire. I don’t believe he can go down the weight to 126, because he missed the weight in one of his biggest fights against Oscar Valdez, and after re-joining Joe Gallagher I don’t see much in the way of improvement back to world level.

It seems like the time has come for Quigg, and I’ll be honest I haven’t listened to the interview but I saw a video titled “It’s Time to Call it a Day Scott Quigg Retires from boxing…” which suggests that Quigg is making the hard but correct decision to hang up the gloves.

As for Carroll, maybe a Carl Frampton fight down the line. It is definitely a fight that would generate money, and in a couple more fights I could see them line up pretty close against each other in the rankings.

As I said previously, 130 sits in a weird place between the Warrington, Gary Russell, Devin Haney area, and the Lomachenko, Tank Davis, Luke Campbell area, so there are too many big big fights out there for Carroll.

But on last night’s performance, he’ll be looking to move up places whatever division he’s in, and after winning all 11 rounds handily and a stoppage to boot, you can’t really blame him.

As for me, this is my last article here for the foreseeable future.

And of course, hope you enjoyed my articles over the years and thanks for reading.