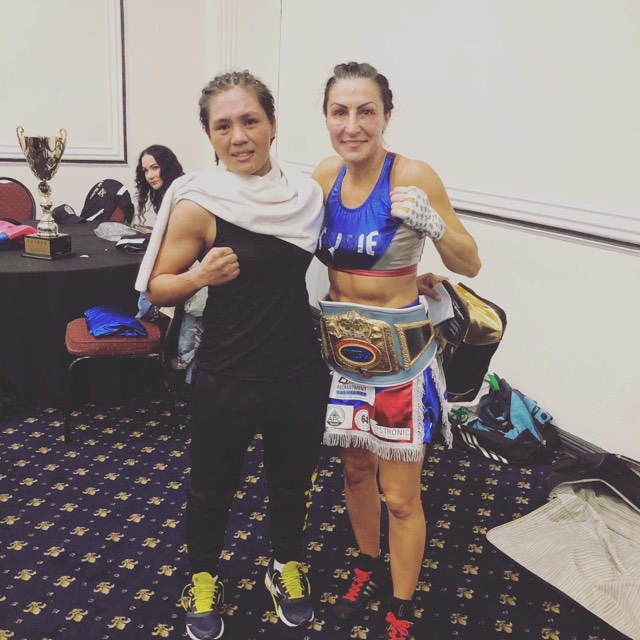 Susie headed a fully stacked line up at the Grand Star Reception and Convention Centre, in Altona North, Melbourne with event by run by Prince Promotions.

Susie’s opponent was Philippine boxer, Gretel de Paz (6-6-2) 2Kos. Despite a near 15 year age gap with Susie being 40 and de Paz being 26, Susie was able to use her wealth of experience in the ring to come away with the victory via unanimous decision.

With the win Ramadan now has 5 World Titles  across three weight divisions, putting her in the same elite class as Jeff Fenech, Lester Ellis and Vic Darchinyan.

Along with her IBA Super-Flyweight Title, Ramadan has earned the WBF Super Bantamweight and the WBF, IBF and WBC Bantamweight World Titles.

I had the chance to ask Susie about her the latest victory and what she wants next for her career and the upcoming Australian fights.

How do you feel about your latest world title win?

On top of the world, coming from a loss in November 2018 in Mexico I’ve been out of the ring for quiet some time and to get in there and fight Gretel (half my age) who really came to fight, uplifted my spirits. I feel overwhelmed that i have accomplished another world title in my 3rd weight is a highlight.

Spending time with my family and close friends enjoying a good meal.

Where are you going to place your new WIBA belt?

In my glass cabinet along side all my other .achievements

Who is your next opponent?

I’m not sure yet as I am having some rest time, will speak to my team and see whats next.

Regardless of weight limit, who would you like to fight the most from the Australian Women’s ranks and the international women’s ranks?

Jorgelina Guanini I think is the IBF World Champion that would be a great fight, I would however love to bring a Mexican to Australia either Guadalupe Martinez (WBC world champ) Maribel Ramirez (WBA world champ) or Miyo Yoshida (WBO world champ) and make it unification bout.

Now that your almost 41, how long do you see yourself fighting?

Who do you think is the one to watch in Aussie women’s boxing?

Ebanie Bridges, 4 wins, 2 by KO, who just won her fight in the states a week ago, she works extremely hard who loves to fight, pushing women’s boxing and always supports all the women in boxing.

What’s your opinion of the possible Mundine v Zerafa bout?

I think its a really risky fight for Mundine.

Who do you think wins Horn v Tszyu.

Both guys doing really well for Aus boxing I think it will be a great fight so i’m interested to see who will win.

With gaining the World’s attention again, it is the hope that Susie can obtain another Major World Title fight or better yet a unification bout on Australian shores to boast the ever growing Women’s boxing.