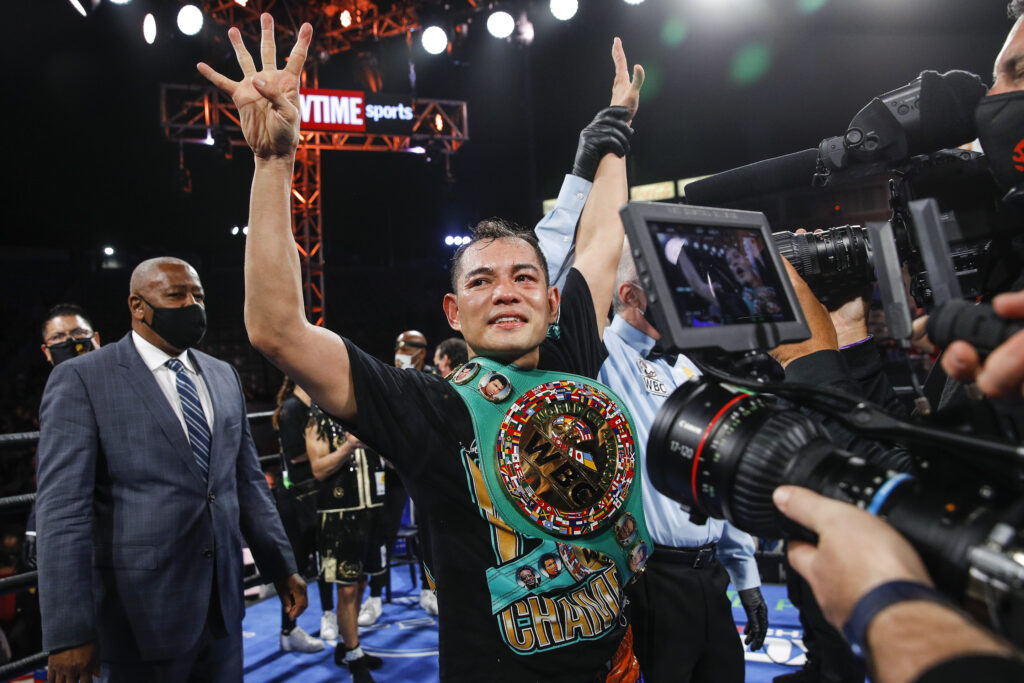 CARSON, CALIF. (May 29, 2021) – Nonito Donaire is champion once again. Fourteen years after he won his first world title, the “Filipino Flash” cemented his Hall of Fame credentials with a sensational fourth-round KO win over Nordine Oubaali to capture the WBC World Bantamweight title Saturday night in the SHOWTIME CHAMPIONSHIP BOXING main event from Dignity Health Sports Park in Carson, Calif. in a Premier Boxing Champions event.

“The king has returned,” Donaire beamed afterward. “I just love the crowds. All my friends, family, all the boxing fans that came out thank you so much. You guys are wonderful.”

The 38-year-old Donaire (41-6, 27 KOs) is now the oldest world champion ever at 118-pounds. He accomplished it with the left hand that’s been the calling card of his career as he dropped Oubaali (17-1, 12 KOs) three times in total.

“Being at this age is not the question, it’s about my performance,” said Donaire. “About my ability to grow. I believe it matters not what your age is but how mentally strong you are. What I learned from the [Naoya] Inoue fight is that I’m back. I can still compete at this level. The whole time I was not fighting, I was learning. I’m ready for the next one.”

Following a feel-out first round, Donaire went to work in the second, walking Oubaali down and countering with thudding effect. Donaire scored the first knockdown early in the third, dropping Oubaali with his trademark counter left hook. The Frenchman rose on unsteady legs and Donaire pounced, landing more big shots until another left hook floored Oubaali just a split second before the round ended. Again, Oubaali struggled to his feet, dazed yet willing to fight on.

The end came swiftly in the fourth. Donaire expertly maneuvered Oubaali around the ring, pinning him against the ropes where a left uppercut sent Oubaali crumpling to the canvas for a third and final time. Referee Jack Reiss immediately called it off. Official time of the stoppage was 1:52 of the fourth round.

“Three decades of being world champion. Nine-time world champion. That’s amazing,” said Donaire. “I came in here and I felt really good. Today I knew exactly what was going to happen. I knew exactly what I was going to do. I think I was just very focused in the gym. I was very, very focused. I just felt really good coming in and I was grateful to get this opportunity.

“Tonight was something that I had to prove to the world that I’m back and I’m stronger than ever. He was a very tough guy. I think ultimately for me, there was a level of should I be more patient? Or should I go for it? Something I learned in the Inoue fight was to go for the kill. And that’s exactly what I did. I was patient but I knew he was hurt enough that I could take him out.”

Matias establishes himself as one of the best in a stacked super lightweight division, but this latest win wasn’t easy. Kazakhstan’s Jukembayev came out strong, landing a right hook-right uppercut combination upstairs from his southpaw stance that got Matias’ attention in the first.

Jukembayev pushed the pace in the second. Matias began letting his hands go in the third, throwing in combination to the head and body. Both combatants were now fully warmed up, setting the stage for a fourth that could be a candidate for “Round of the Year.”

It began when a hard left hook staggered Jukembayev and drove him to the canvas. Matias sought to close the show but Jukembayev held on, cleared his head and started landing his own shots. With a minute left in the stanza, Jukembayev stunned Matias with a left cross. Instead of clinching, Matias fought fire with fire, bringing the crowd out of their seats with toe-to-toe action until the bell sounded.

Matias never stopped coming forward. Following a one-sided sixth, Jukembayev returned to his corner with both eyes swelling shut. The back and forth ensued in the seventh as Jukembayev buzzed Matias with two right hooks toward the end of the round.

Matias returned to the driver’s seat in the eighth, pounding away at Jukembayev with both fists. In total, he out-landed Jukembayev by 100 punches (234/608 to 134 /409) and was more accurate (38.5% to 32.8%). The accumulation of blows was enough to convince Jukembayev’s corner to request the bout be stopped.

“He knew he had nothing to lose. He came in and was doing everything strong,” said Matias. “He knew that all he could do was knock me out to win. I would have done the same thing. That’s a warrior’s heart and he has all my respect.

“After that fourth round, I mean he is a very competitive fighter, so it turned into a war after that point. My hands go up to him as well. It was a great fight. I definitely have had other opponents that were very good, but this is the one that has given me the hardest test.”

In the telecast opener, Gary Antuanne Russell (14-0, 14 KOs) continued his ascent up the super lightweight ranks. The undefeated Russell became the first to stop the rugged Jovanie Santiago (14-2-1, 10 KOs), dominating Santiago until referee Sharon Sands halted the contest following the sixth round at the suggestion of Santiago’s corner.

“The objective is to get the man out as soon as possible and come out unscathed,” said Russell. “I just want to say that Santiago was a class-A opponent. A lot of people think he beat Adrien Broner. I want Adrien Broner now.”

With older brother and WBC World Featherweight Champion Gary Russell Jr. working his corner, Gary Antuanne controlled the action from the opening bell. The 2016 Olympian worked the jab and straight left behind the southpaw stance, snapping Santiago’s head back several times in the first.

Russell, 24, continued to land the left in the second and third. Early in the fourth, he followed up a straight left to the ribs with a short right hook upstairs that dropped Santiago to a knee. Puerto Rico’s Santiago gamely rose to his feet and survived the follow-up onslaught to make it out of the round.

“The importance to me is to execute round-by-round and round-by-round, I was executing more and more. My father told me to go to the body, right hook upstairs. He was open to that,” said Russell.

Russell showed no signs of slowing despite being extended beyond four rounds for the first time in his pro career. The Capital Heights, Md. product battered Santiago in the sixth, landing punishing combinations throughout the frame. Moments later, the bout was stopped.

“It’s definitely important to me to perform so I’m not just known as Gary Russell’s younger brother,” said Russell, who landed 146 of 444 punches (32.9%). “I come from an excellent background of fighters. We’re building a dynasty.

“How soon do I want to get back in the ring? If I could fight on the Deontay Wilder card, that would be great.”