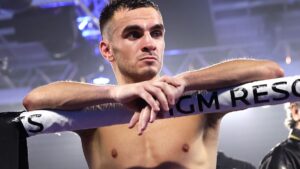 Former WBA Super-Flyweight Champ Andrew Moloney, has suffered what I believe to be the worst decision to happen to an Australian fighter since Jeff Fenech v Azmah Nelson 1 in 1991. Fenech was famously robbed of a clear points decision over Nelson in that fight with the fight being declared a draw, therefore denying Fenech the WBC Super-Featherweight Title in Las Vegas.  Today history has repeated itself as yet another Aussie was denied a chance to once again become world champion, and you guessed it like Fenech it happened in Las Vegas.

In his rematch against current WBA Super-Flyweight champ, Joshua Franco who easily beat Moloney in the first fight, Moloney completely changed the course of the rematch. From the opening bell, Moloney took control of the fight landing effective jabs to the face and body shots that Franco had little to no answer for.

Referee Russell Mora declared an accidental headbutt between the pair that at first seem like nothing but now will forever change the course of this fight. Franco’s eye was apparently damaged from the headbutt but he finished the round and the doctor cleared him to continue for round 2.

In the second, Moloney was in control of the fight and applied more shots to Franco’s continuing swelling eye. By the end of the second round, Franco was unable to see out of his right eye. Therefore the doctor called a stop to the fight, with the referee declaring the fight a ‘no decision’ due to the accidental headbutt and the fight had not gone four rounds.

But in a complete waste of time, officials reviewed the footage and despite numerous retakes and deliberation, no headbutt that could be used as evidence to support the referee’s decision could be find, and despite it taking near half an hour, the decision of the referee was upheld with the fight being declared a no contest. As a result Franco will retain the WBA Super-Flyweight Title.

His team is talking s—,” Moloney said in the post-fight interview.

“That’s why his eye’s shut, not the headbutt. There was no headbutt.

Immediately calls where made for a third fight in the interest of fairness, but boxing is not a fair sport.

Being that Franco is a Golden Boy fighter and not represented by Bob Arum’s Top Rank, a third fight may prove very difficult for the Australian. Golden Boy may have other competition in line for Franco, but reports on Twitter suggest that Bob Arum with meet with Moloney’s team on Monday to appeal the decision.

While Crawford has an easy fight, Moloney’s fight has just begun.

Click the link for the recap with Tstreet controversy