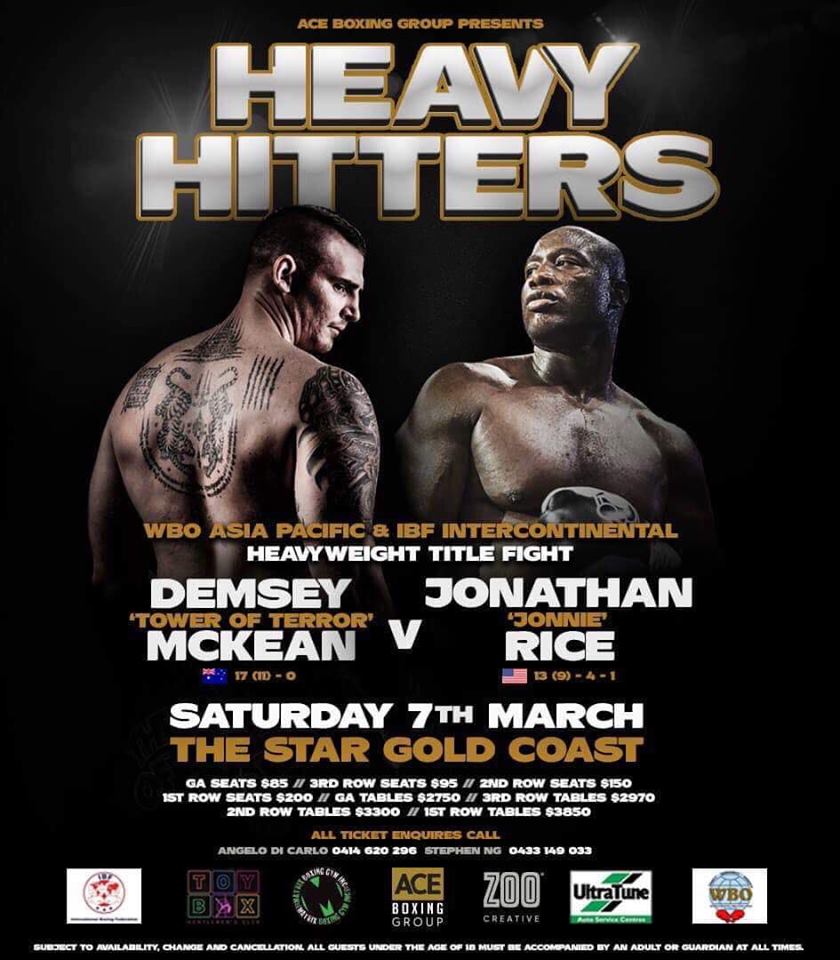 Australian Heavyweight, Demsey Mckean (17-0) now ranked 13 with the WBO, is ready to step back into the ring this Saturday night.

Mckean will headline another event with follow Australian, WBO Super-Lightweight ranked number 2, Liam Paro. (18-0). Jacob Ng was also to appear on the event, but has had to withdraw due to a rib injury.

Mckean takes on American, Johnathan Rice (13-4-1) is a battle of the big boys, as both men are around the 6”6 mark. Originally Mckean was supposed to be in an all Australian battle with Lucas Browne, but Browne withdrew from the fight to pursue bouts overseas.

Mckean and Rice will compete for the vacant IBF Inter-Continental and WBO Asia Pacific Heavyweight Titles.  Both men are coming off knockout victories from there previous fights.

While Mckean continues to climb the ranks of the heavyweight division for the WBO, a statement needs to be made to grab the attention of the WBO and other major boxing bodies. Noting that WBO World Title is currently held by Anthony Joshua, who is defending his world titles against Kubrat Pulev in June, it maybe some time before Mckean is considered for a title shot.

Liam Paro who is nipping at the heels of the world champion in the 140lbs-Super-Lightweight division, will be in a keep busy fight against James Chereji of Romania. Cherrji is undefeated with a record of 17-0.

The fight night is happening at the Star Casino on the Gold Coast, this Saturday, March 7, and is an Ace Boxing Promotions event.

The event is a sellout, but can be streamed live at www.epiccentre/tv