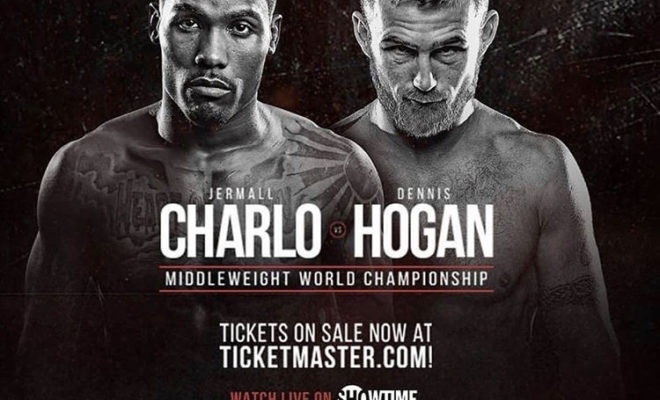 Both Charlo and Hogan will return to the Barclays that both men know all to well. Charlo has had several bouts in the Centre, while Hogan returns for the first time since 2015, he was in the corner of former three-time (IBO, IBF/WBA) middleweight champ Daniel Geale as he fought Miguel Cotto for the very same title, the WBC middleweight title.

Hogan is hoping that history will not repeat itself as Geale was defeated in four rounds by Cotto. This will be the second world title fight that Hogan will compete in this year. Earlier this year in April, Hogan fought WBO Super-Welterweight champion, Jaime Munguia. Many thought including myself that after the fight Hogan should of been given the win, but the win went to the undefeated Munguia.

Putting the loss behind him, Hogan returns to the middleweight division to hopefully succeed where Geale failed and became the first world champion Australia has had since Jeff Horn.

Hogan has been given little chance of success on the weekend to defeat Charlo, but like Australian fighters before him when, Kostya Tszyu fought Zab Judah in 2001 or more to recently when Jeff Horn fought Manny Pacquiao in 2017, the Aussie bloke came up trumps and pulled off the upset.

All that remains are the final press conference and the weigh-in before the pair get into the ring.

Here’s what Hogan had to say in the lead up to his fight.