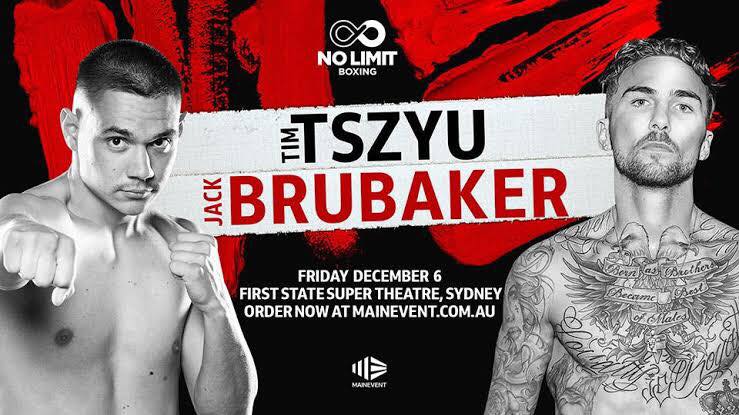 Now that Anthony Mundine has finally retired (again and let’s hope permanently this time) it’s time to focus the young guys of Australian boxing. We are all aware of the massive rematch between Heavyweight champion Andy Ruiz and Anthony Joshua, this weekend in Saudi Arabia but in Australia all eyes are on Tim Tszyu v Jack Brubaker and WBC Middleweight champ Jermall Charlo v Dennis Hogan.

This Friday night, Australian time, Tim Tszyu will put his IBF Australiasian Super-Welterweight title on the line against upper coming star Jack Brubaker, these men are no strangers to each other.  This will be the third time this year that Tim Tszyu headlines and Mainevent Pay-perview and the third time that Brubaker will feature on the card.

In May Tszyu defeated Joel Camerilli for the Australian Super-Welterweight title while Jack Brubaker was in the fight of the year against Ty Teleford.

In August Tszyu defeated Dwight Ritchie while Brubaker took care of Danny Kennedy. Now the pair are on a collision course toward one another.

A couple of months ago, Brubaker made the switch in training camp for Graham Shaw to Jeff Fenech. The switch in camp would give Brubaker the opportunity to boast his career. With Fenech’s long-time rivalry with the Tszyu’s father Kostya, Brubaker was offered to Tszyu as a formidable opponent for the up rising star and with the rivalry between Fenech and the Tszyus brought to the boil again, the deal was made.

Brubaker is a five to one underdog, but this puts Brubaker in a no lose situation, if he loses, it’s expected, if he wins it’s a huge upset.

Brubaker is basketing in the opportunity,

“I’m just soaking up all of the atmosphere,” Brubaker told foxsports.com.au. “Soaking up everything and just enjoying it. The more hype, the better I perform.”

It’s certainly a must see event this Friday night on Foxtel’s Mainevent. The fight takes place at the ICC Arena in Sydney, New South Wales.