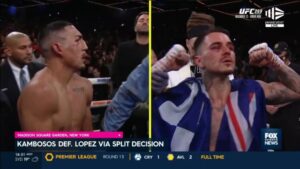 In the best win for an Australian boxer in the history of the sport, George Kambosos Jr has become the new IBF, WBA (Super), WBO, The Ring and WBC (Franchise) Lightweight World Titles by defeating Teofimo Lopez in New York City, in the world’s most famous arena, Madison Square Garden, November 27, 2021.

Kambosos Jr was all class in the post fight interview with a touch of the famous Jeff Fenech phrase “I loves youse all’. Kambosos even told Lopez that his new born son was the most important the to him now and suggested a rematch in Australia. Unfortunately Lopez made a complete fool of himself and embarrassed himself suggesting that he won the fight ten rounds to two and never acknowledged Kambosos Jr’s win. It should be noted the that referee did raise Lopez’s hand prematurely in the post fight announcement .

Before the fight, the lack of Australian media’s interest in this fight was alarmingly disappointing but now the Australian boxing media will go ballistic.

Now the real work begins for Kambosos Jr, staying the champion. But for now Australia celebrates its biggest ever win.