Firstly to Kambosos Jr, Kambosos Jr took on former IBF Featherweight World champion, Lee Selby (28-3)9Kos, winning an intelligent and clinical points victory, with the cards reading a split decision for Kambosos. The judges had it (118-110) Kambosos, (115-114) Selby and (116-112) Kambosos. In my personal opinion, the 116-112 card for Kambosos was the only true reflection on the fight. 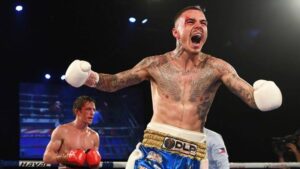 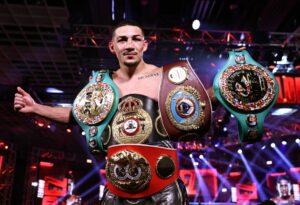 Kambosos said in the pre-fight zoom media call, that he would love to bring a huge fight out to Australia and would like to fight in the Marvel Stadium, Melbourne, Victoria which can hold approximately 55000 people.

Now the negotiations between Lou Dibella (Kambosos’ promoter) and Bob Arum (Lopez’s promoter) can begin. Arum has and stated that he would love to bring another huge fight to Australia (following the success of Pacquaio v Horn in 2017) and being that Moloney has just loss to Inoue and will not be bringing a world championship fight to Australia anytime soon, Kambosos is clearly the horse to back.

If the fight between Lopez and Kambosos can be brought to Australia, it will be the biggest fight contested on Australian soil ever. Australian boxing has had virtually no success at the lightweight division, with no Australian ever winning a major title at the 135 limit. The last Australian to contend for a world title at lightweight was Michael Katsidis v Juan Marquez in November of 2010. Katsidis lost via TKO.

The fight would easily attract the fans as no Australian has ever contested in a unified bout on Australian soil before, it would be the biggest home fight ever.

Lets hope Kambosos Jr gets his opportunity on home soil as there are rumours that Lopez is going to go to the 140lbs Super-Lightweight division or fight Vasyl Lomachenko in a rematch.

Now to the disappointing news of the day, bantamweight contender, Jason Moloney.

In the biggest fight for an Australian since Lionel Rose v Fighting Harada in 1968, Jason Moloney fought Naoya Inoue for Inoue’s WBA/IBF and Ring Bantamweight Titles.

The lead up to the fight, with Inoue doing little press before the fight, there was a sense that with Inoue’s almost year layoff and eye socket injury, that Moloney was in with a better chance of victory than previous challengers. ESPN commentator and former world champion Tim Bradley, said the fight was 50-50 before the opening bell.

But this all made little difference, although Moloney got off to an ok start and did somewhat expose the eye injury of Inoue, it made little difference as the Australian fighter couldn’t capitalise and used his power to defeat Inoue. Inoue won every round of the fight and sent Moloney to the canvas in the sixth and finished Moloney off with a devastating right cross to the face sending Moloney to the canvas again in the closing seconds of the seventh round.

Moloney showed heart to try to get up, but the fight was called off with the official end to the fight being 2:59 of round 7. 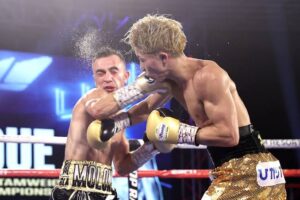 The victory crushed the dream of Moloney and ended the winning streak that Australian fighters had over Japanese fighters in the bantamweight division. For the record it’s now  2-1 to Australia.

Moloney will have to rebuild his career in 2021 with Kambosos building to the fight of his career.