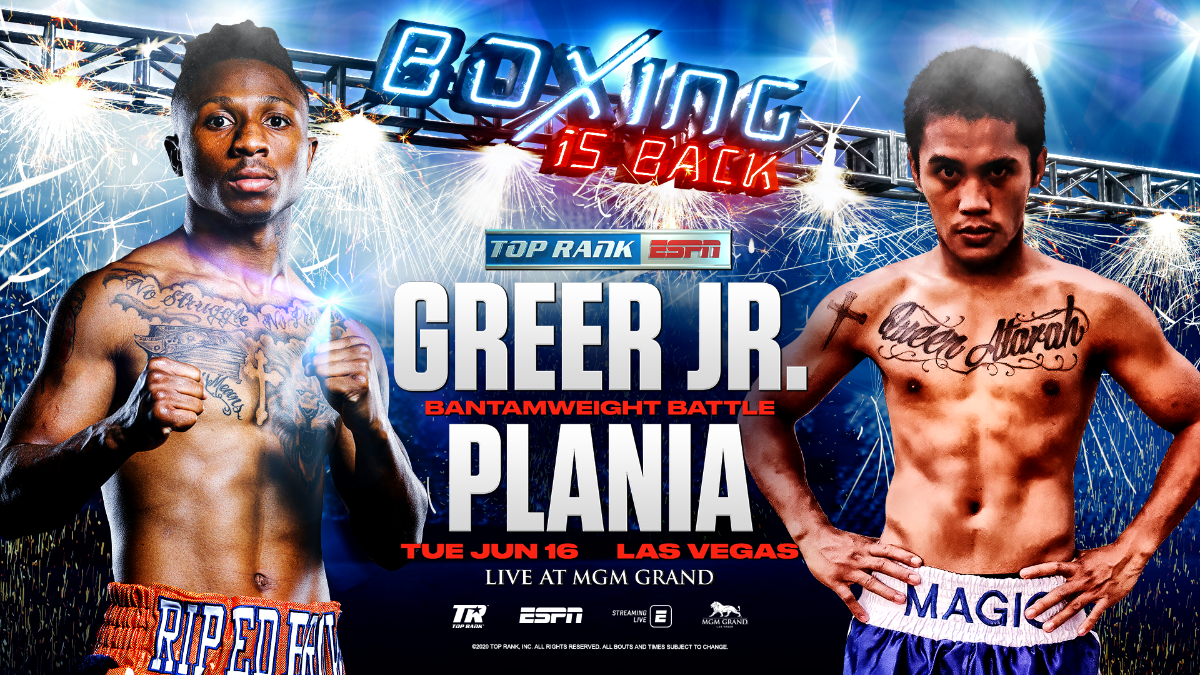 “It is exciting to see these great fighters back in action and in fights that promise to be action-packed,” said Top Rank chairman Bob Arum. “Greer and Pedraza have tough opponents in front of them, but if they are victorious, we could see them in world title fights before the end of the year. Navarrete is the king of the 122-pounders, a throwback fighter who wants to stay as active as possible.”

Greer, the Chicago product who taunts potential KO victims with custom-made pillows, is knocking on the doorstep of a world title shot. He has won 19 fights in a row and is currently the WBO No. 1 contender at bantamweight. Plania, meanwhile, has won eight straight bouts since a March 2018 decision loss to Juan Carlos Payano, a fight that propelled Payano to a world title shot against pound-for-pound great Naoya Inoue.

He's called "Don't Blink" for a reason: @JoshuaGreerJr can take a fight over in an instant. 👀#GreerPlania | TUESDAY | ESPN – 8pm ET pic.twitter.com/bWfjiQsxkB

“Whoever the opponent is, it doesn’t matter. I prepare the same,” Greer said. “Every fight is a world title fight for me. I’m ranked number one in the world, so I have to take advantage of this opportunity. ‘Mr. ESPN’ is back!”

Former lightweight world champion DeMarco, who is coming off a competitive decision loss to top contender Jamal James, represents a quantum leap in class for the 28-year-old Santillan. A native of San Diego who has stopped his last four opponents, Santillan hopes to become the first man to knock out DeMarco in nearly eight years. In his last bout, he overcame a nearly 19-month layoff to knock out Wilfrido Buelvas in two rounds.

Nikoloz Sekhniashvili (5-0, 4 KOs), a 26-year-old who hails from the nation of Georgia, will make his 2020 debut against Detroit native Isiah Jones (8-1, 3 KOs) in a six-rounder at super middleweight. Sekhniashvili, trained by Javiel Centeno, is part of a deep stable of fighters that includes Puerto Rican phenom Xander Zayas and lightweight contender George Kambosos Jr.

Super featherweight prospect Edward Vazquez (7-0, 1 KO), from Fort Worth, Texas, will face an opponent to be named in a six-rounder.

Puerto Rican-born heavyweight Hector Perez (6-2, 3 KOs) will fight southpaw spoiler Juan Torres (5-2-1, 2 KOs), from Cypress, Texas, in a six-round bout. Torres has won two straight and has never been knocked out in a professional match.