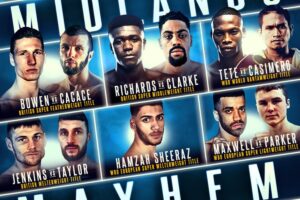 “I want to fight the tall rangy Southpaw” is up there with “why can’t this fight just go the distance?” and “to be honest, the vegetarian option is better than the meat”, which perhaps explains why Zolani Tete has found it hard to get himself some credible opponents over years.

This did all change however when he was entered into the bantamweight version of the WBSS and was in fact my pick to win the tournament. It’s such a shame then that he had to pull out through injury, because like so many fighters he finds himself in the boxing specific problem of being too talented for his own good.

I think about Tete in a similar way to how I think about Crawford or even Andrade, in that there is no real blueprint in how to beat them. Not that they haven’t had moments where they were hurt or bested in spots, but there doesn’t seem to be any sort of fighter where you think “oooh that’s a bad stylistic matchup for Crawford here”.

5 foot 9 is tall for a Batamweight any way you slice it, and Tete doesn’t fight in that traditionally stiff African style, instead looking more like a slick American. You squint your eyes a bit, and you could be watching a Regis Prograis or a more defensively minded Tank Davis.

Relaxed guard, emphasis on the counter, and bending from the waist, Tete is one of those guys who you watch and makes you think “damn this boxing lark is easier than I make it look when I’m in there”. 21 knockouts in 28 fights also tells a different story. You don’t get the sense that Tete is throwing everything with 100% power in a way that Tank is, but the shots are sharp and fast and very often a step back and a counter right from the southpaw stance is his bread and butter.

If I really stretch myself here, I suppose you could say that Tete is a guy who likes it at range more than up close, so perhaps he’s a little bit more vulnerable there, but that’s also like saying “I just wish Canelo would box from range more”, I mean…you’re kind of right, but Tete doesn’t need to fight in a phone booth most of the time because he’s so good at slipping shots landing counters, and making the opponent look kind of amateurish in doing so.

To be honest when I looked up his opponent John Riel Casimero, I didn’t exactly have high hopes, partly because I’d never heard of the guy, and partly because I knew the fighter he was going up against.

Look, I don’t tend to stereotype boxers, but when I say to you Philippine boxer, an Adam Booth, come forward with head movement type style isn’t the first thing that you think of, but that is exactly what I saw when I saw Casimero fight. He stands almost in a Frampton like stance, fairly wide feet, left hand low, pawing with the lead, and emphasis on slipping shots on the way in.

Come forward counter puncher is the best way I’d describe Casimero as a style, and for the first 6 rounds of the fight I expect him to give Tete plenty of problems. I mean who wants to face a guy who’s in their face, pawing out a jab begging you to throw, and when you do, slips underneath and explodes with a right hand.

It’s almost Canelo esque in style, but with greater emphasis on movement rather than blocking punches with the gloves, and in the reverse stance Casimero also likes the pull back counter left hook that Tete does. The downside with this come forward, active style is that you need an incredible gas tank to pull it off for the full 12. I mean, you work hard for all the success you get, and that is why I think Tete should get the win here tonight.

Good fights aren’t really Tete’s bag normally, do you see a boxing masterclass? Yes. Are you basically watching one guy? Yeah. But in this fight I really do think you’ll see Tete get clipped a few times, and body shots will be exchanged on the inside, but I think class will tell in the end.

Tete at his core is a guy who makes you miss and Casimero isn’t, and when the fight could be close coming into round 9 I think it’ll be the slightly better footwork and slightly better reflexes of the South African that will prevail. I could easily see Tete getting a knockdown with an uppercut as Casimero walks in late, but a 12 round 8-4, 9-3, type of fight sounds right to me, but action shouldn’t be short to come by in a great clash of styles here.