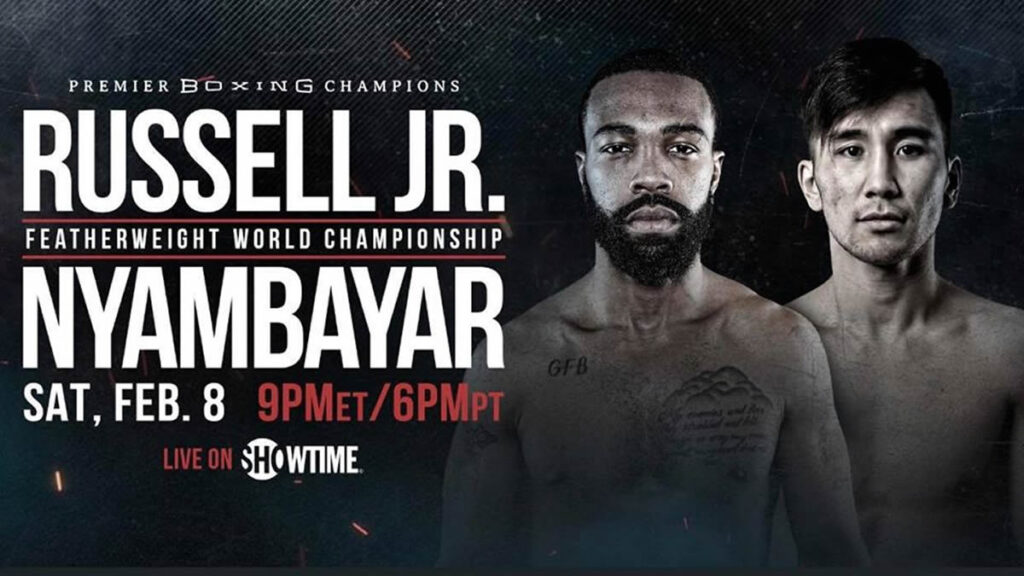 It is rare that I have to do write up two fights properly for an article.

90% of the time, I’m either writing about a decent world title level fight, with pretty much nothing on the undercard, or an absolutely huge fight that makes the decent undercard look like nothing.

I mean how many people were talking about Smith N’Dam in the run up to Ruiz Joshua 2.

This is one of those rare occasions where I have two fights, both worth talking about, so I’m going to very helpfully split this into two sections.

As you’ve probably guessed, let’s talk about Gary Russell first, against a Mongolian fighter who’s first name looks more like a scrabble board than a boxer.

On a side note I did chuckle when I watched one of his past fights.

Because clearly he has as much faith in the West pronouncing his name as I do, and so he had “King Tug” on his shorts. I’m sure even us as boxing fans should be able to manage that.

If we start with Gary Russell though, and I’ll get the obvious out of the way first.

There I said it. Russell has the fastest hands that I know of in boxing today. I wouldn’t be surprised if there’s some random Thai fighter who fights at 7 stone who has faster hands, but of top-level fighters that I’ve seen, he tops the list.

A lot of these American PBC fighters, Charlo, Andrade, Russell I’ll be honest I don’t get that excited to watch for two reasons. The first is that to be blunt they don’t tend to fight anyone, and that is normally due to very careful matchmaking via Haymon, and the second is that most tend to operate in divisions that Brits lag behind in.

If you haven’t guessed already by my spelling of centre, there you are I am indeed a Brit…

I mean who’s our best Light Middleweight, apart from Brook, I literally can’t think of anyone.

So it is fair to say that I did get a bit of a shock when I sat down and finally watched a Gary Russell fight, against Kiko Martinez, and while I wasn’t shocked by the speed, I was shocked in how he used it.

An Amir Khan for example uses speed to out box you, but not necessarily to bust you up, and that is what I thought Russell’s game was. But I really didn’t see that against Martinez. What I saw is a southpaw who holds his feet in the centre of the ring, leans his torso forward, almost Mayweather esque begging the opponent to commit, and when they do counter with a razor-sharp left hand or combination.

What Russell also does well is pivots out at an angle, very often after the opponent does fall in and Russell gets off the left hand and the following combination Russell slips under and out.

It’s like a weird combination of Khan, Rigondeaux and Lara. 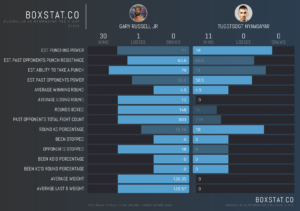 It almost looks unfair on his opponents to be honest, when you’re blessed with that sort of hand speed, it just makes everything so much easier. If you’re the opponent you have to be one step ahead because if you aren’t you’re going to get beat to the punch, which is perhaps why Loma is the only one to have got the W over Russell, and even that was 6 years ago.

It is therefore a tall order for Tugstsogt Nyambayar…

Had to copy and paste that name again…

I always give fighters a chance, I never write about fighters who I haven’t attempted to look at, any idiot can write about what they see on someone’s Boxrec. Billy Joe Saunders’s opponent Marcelo Coceres being a prime example of someone who I thought looked better on tape than what the bookies were saying, and Nyambayar I think may fall into that bracket.

Is he the most skilled fighter I’ve ever seen, no?

Is he particularly athletic, no, nothing incredible.

But he is very solid in his game. In the same way that a Luke Campbell or Oleksandr Gvozdyk is, so it wasn’t really too much of a surprise when I see that Nyambayar was a silver medallist at London 2012. Standing orthodox, I’ll be honest nothing really jumps out, and that is not a bad thing, he doesn’t really have any obvious flaws.

Standing 5 foot 8 he is tall for the weight and a nice high guard and front arm parries work well against the southpaw jab. The only thing I will mention is that for what I assume is an amateur boxing pedigree Nyambayar works very well to the body and on the inside, he also does a very nice catch and counter right hand.

It’ll therefore be interesting to see what sort of gameplan Nyambayar comes in with, because he does have options, fighting predominantly on the front foot, but capable moving backwards, with Russell, even against Martinez while he dominated, by the 5th round there wasn’t quite the same spite in Russell’s work, though the speed remained. Maybe Nyambayar may try to take the strong out of the American that way.

If I were the guy drawing up the fight plan, I’d tell Nyambayar to throw lots and lots of feints. Russell is likely to want to draw Nyambayar in so he can counter with the shots, so I’d say try and draw the counter and use the extra length that he has to just land simple shots, there’s no need to try and bang up close if he doesn’t have to.

He’s going to end up losing the first few rounds just due to the sharpness difference but if Nyambayar can turn the screw, think Stevenson vs Jack, you could see at the very least a competitive final half.

But what do I think will actually happen?

I’d bet on Russell starting out fast and winning the early rounds on the back foot with the counters, and as the fight progresses Nyambayar nicking maybe three rounds just to activity and Russell taking a few slow rounds due to fatigue. A 9-3 kind of scorecard sounds about right in a fight that I’d be surprised if Russell looked good in, but as I’m sure you know, I have been wrong before many times. 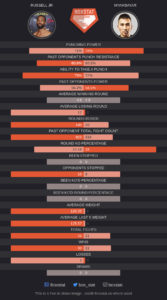 Now we move onto the second one.

Damn saying what I write would be way faster than typing…

Rigondeaux has a special place in my heart for two reasons: one is that I do love the way he fights.

A simple but effective system of using a non-committal jab from the southpaw stance, and a bullet of a left hand to either counter the opponent or after the blinding right.

The second is that he is in my mind the fighter who has been, for lack of a better term, shafted the most in boxing compared to the talent he possesses.

It’s funny but no one now talks about how the trio of Frampton, Quigg and Santa Cruz shamelessly ducked this guy at 126, and it is just sad how his career has ended up.

At 39 his best days are behind him, but even now I’d be very surprised if he lost to someone of the calibre of Solis whose tendencies almost remind me of a featherweight Wilder.

I mean you can clearly see where the weight is, and it definitely isn’t to land a power jab, you see the weight shift back for a right hand a mile off. That really is Solis’s game, the right hand, and given how off balance he is when he throws it, Rigondeaux if he is a shadow of his former self should be able to land the left with ease as Solis marauders forward. I just hope he doesn’t try and trade on the inside against this guy to try and “be entertaining”, because with the skill difference it should look like night and day in the ring.

Next week back to normal and one fight at a time.

Then I only have a chance of being wrong once.