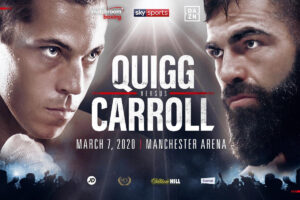 Not a division that is really talked about, and if I’m honest one of those divisions that I had to look up who was ranked because I really couldn’t think of much.

I rarely think about 130 pounds to be honest…

Carl Frampton, Leo Santa Cruz, Oscar Valdez, Miguel Berchelt being the stand out name in terms of quality. All are good fighters, sure, but I’d never be cancelling my plans to watch any of them fight, not helped that since 2017 when Santa Cruz and Frampton fought in the rematch they don’t seem to have much in the way of willingness to fight each other.

I’m not exactly selling it am I?

But when I was given this fight to write for, my first thought of “oh yeah I wonder what Scott Quigg is up to these days” followed by “Jono Carroll… I think he was that Irish bloke outclassed by Farmer” doesn’t a mouth-watering clash make.

Despite this, you may be interested to read that Scott Quigg was among my favourite fighters in my slow transition into a hardcore boxing fan 2013 ish. To a 16 year old me Quigg had all the attributes to give Rigo a real problem. Great physicality, good power, good engine, and a solid if unspectacular style, and I remember picking him pretty confidently to beat Carl Frampton, and in that fight I think he showed that he really could.

But of course he lost.

It’s a bit of a shame then how his career has panned out, following the Frampton loss he moved to Freddie Roach, and I’ll be honest I think he’s moved backwards technically since the move.

Probably a good point to go over Quigg’s style.

He is a pretty good example of a pressure fighter. High guard, square, but dipping and diving occasionally with lots of emphasis on catching shots on the gloves and forearms. But something to me has always been missing since he left Joe Gallagher, and I surprised myself I didn’t think of it earlier.

It’s an almost complete abandonment of the jab.

If you’re a come forward pressure fighter, as Quigg is, just popping a jab out does so many things I’m not going to talk about it because this article would be too long. Quigg does get away with this for the most part, just being so fit and physically strong, he can just walk into range, ducking under and getting wide hooks off, but I just don’t really understand why Roach of all people seems to have Quigg  completely abandon the jab.

Think of Maidana and the improvements that he made using his jab, if you need any convincing that pressure fighters need to be using their left as much as their right.

I’ve written down “blunt instrument” in my notebook for Quigg which may be a bit harsh, but as he found out against Valdez he needs to be a bit cuter coming in if he’s going to make it at a world level again.

If Quigg lacks a bit of finesse but his physicality is good, Jono Carroll fits more the opposite side of that coin.

Southpaw this time, Carroll again is a pressure fighter, but has much better use of the jab and more emphasis on volume rather than power.

If Quigg is a Jarrett Hurd kind of pressure fighter, Carroll is more of a Josh Warrington.

Very harsh on Quigg in that example, but hopefully I made my point.

Not to say that people are walking through Carroll. In fact I think his physicality and jab means fighters are normally moving backwards, but there is that sense for a fighter that doesn’t have anything amazing in his toolkit a little bit of punching power would really help.

Probably best shown in the Farmer fight, which despite putting on a good account of himself, throwing and landing plenty of shots, Farmer was never really worried.

To call this fight is actually pretty tricky because they are two fighters who come forward, and also two fighters who don’t really have much of a back foot game at all. This isn’t Oscar Valdez who can switch up his game during a fight, so it’ll be interesting to see how the fight geography pans out.

If I had to make a prediction I’d say it’d be Carroll who’ll be the one moving back in the early rounds, using his jab and good head movement to land some solid but unspectacular combinations on the Englishman as he tries to walk into range.

It could get pretty messy though with the southpaw orthodox matchups with both fighters sticking their heads in the mix.

However, I do see Quigg having success by round 2, round 3 ish, in just walking Carroll down, and against a fighter who by no means a puncher Quigg should have success landing his left hook to the body, left hook up top, right hand combination and I see Carroll falling apart and being stopped by round 4.

Quigg will get hit I’m sure but if Valdez never stopped Quigg in his tracks I don’t see how Carroll will be keeping him off, especially with the physicality as well.

It’ll look like a boxer vs a blunt instrument, but I think it’ll be will rather than skill which should get the win in a division that to be honest needs some excitement at the minute.