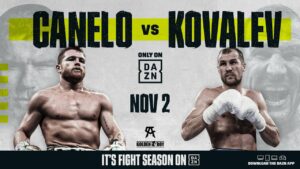 It’s both a blessing and a curse sometimes writing about a “50 50 fight” because although, in theory at least you should have plenty to talk about, in practice you can very well live up to Floyd Mayweather Snr’s saying of “most people don’t know shit about boxing”.

Highlights of this on my end were Degale Eubank Jnr, Broner Porter and Joshua Klitschko, with me reading my own article back with the thought of “this guy clearly doesn’t know the difference between Sugar Ray Robinson and Sugar Ray the band”.

On other occasions Spence Garcia, Whyte Rivas and Canelo Golovkin 2, I’m more on the money.

Thinking about it now, I suppose if you’re getting these decisions right half the time, you might as well not even break it down and just pick with your eyes closed…

Anyway, I’m sure you can see where I’m going with this. Canleo Kovalev is one of these fights, it’s the unusual combination of shady looking vodka with shadier looking beef because to be honest I have been going back and forth on this fight in my head in the past week.

As I watched their most recent fights back, I saw a Canelo knockout round 9 or so all day, but it was those “trainers predict Canelo Kovalev” videos that brought me back into line.

Everyone knows vaguely how these two fighters fight. Canelo fighting more like a come forward counter puncher nowadays using his great head movement to counter off the jab, he especially throws a lovely long right hand to the body, and Kovalev being the almost amateur style boxer with everything starting and finishing off the jab, with a long right hook round the guard to boot.

What people don’t know however is that Kovalev cannot fight inside at all, and I was surprised at the extent of this when I broke him down for one of my videos on my YouTube channel. It was almost Klitschko like the way he wraps fighters up on the inside, and I think this could spell disaster against an inside master like Canelo.

If Canelo can carry not even his power per se but his physical strength I think he should have enough to essentially counter punch Kovalev’s jab and then work inside which will force Kovalev to clinch.

I see the fight playing out with Canelo starting very cautiously, and it being a very quiet opening two or three rounds with Canelo being an unknown quantity for Kovalev and Canelo not looking to get caught with anything by the Russian.

There should be more and more flashes of brilliance from the Mexican as we go as he gets into the groove with Kovalev’s timing, Canelo landing right hands over the top of the jab. Once Canelo does get inside it should be game over with Kovalev being forced to hold on and Canelo being a master of going to the body body body, and then bringing the attack up top when the opponent is least expecting it.

If Kovalev is going to have success he is going to have it early, when the jab is sharp and Canelo hasn’t made him second guess himself with the counters, plus Canelo not being used to the extra length at 175. However, to me Canelo wins this fight because he is a far more versatile fighter.

Sure, he is probably going to come off a bit worse than Kovalev in a battle at range, but I see Canelo winning easy at mid- range and especially up close. I think it’s just a case of how long Kovalev can keep that ranged fight going. It’s worth saying also that Kovalev tends to finish all his punches on a jab, which should serve him very well against someone like Canelo and it’s good that Canelo has one of the best chins in boxing because I definitely wouldn’t be confident that a normal world level 160 pounder’s chin would hold up against Krusher.

But Canleo is no normal 160 pounder, he really is something special, and great to watch from an entertainment viewpoint. I think it’ll be another great night for the Mexican who’ll be adding another top name to a very very solid resume, Canelo TKO round 9 after being behind at round 4.

On the undercard undefeated Lightweight Ryan Garcia 18 (15 KOs)-0-0 takes on Romero Duno 21 (16 KOs)-1 (0 KOs)-0 the fighter which caused Garcia to be pulled from the September 14th card, and the resulting Twitter spat between Garcia and Golden Boy.