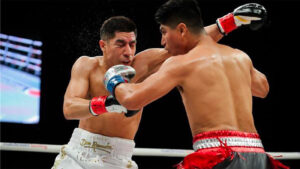 It would be really easy to be like “well…Garcia Vargas was a close fight, but in the end, quality showed and really MY PREDICTION was the correct prediction”.

But if someone out there is really reading these articles, I think it only makes sense if I don’t “follow the pack” and tell you straight up who I thought won despite what the popular consensus is.

And I thought Vargas won.

Granted I watched the first 6 rounds in my bed. And if anyone knows me, they’ll know I don’t exactly spring out of bed at my sharpest, but ill be honest I had it 8 rounds to 4 Vargas.

To me Garcia was far too inactive to give most of the rounds to. Of course he landed the eye-catching shots but it’s hard to give him rounds when he was just outworked for most of them even if he was never really hurt. I don’t normally like looking at the punch stats of a fight, but I really would here, because for my money Vargas was throwing about double the punches as well as landing more.

Something may have to do with the commentators, I watched it on Dailymotion with Russian commentary, and I wouldn’t be surprised if DAZN gave a bit of favouritism to Garcia skewing the perception, but it may be a fight that I need to rewatch, because I’m either blind or a genius.

Normally though the answer to that question is the former.

I thought Vargas won the first three, using the jab, nice combinations up and down with Garcia doing really nothing of note despite taking some to the body and blocking most but not all to the head.

Then Garcia did what I thought he should do in the pre-fight.

Vargas has a really common habit of whenever another fighter comes into his space 9 times out of 10 he will duck to his right and throw a left hook.

It works great, but as Groves found out against Froch a right hand often beats a left hook to the target, and Garcia started throwing 1, 2 after 1,2 and had great success since he just knew where the head of Vargas would be, and Vargas never really adapted.

Culminating in the knockdown in the 5th.

But I gave Vargas rounds 8 onwards. Yes, I might be blind, Canelo Golovkin 1 being the obvious one, me scoring it a draw the first time I watched it, then switching to 8-4 GGG. But I thought Vargas was simply out working Garcia in a fight showing that Garcia really should move down at least one weight division.

If he’s struggling with Vargas, against Pacquiao he’s going to be in for a world of trouble.

I thought it might turn into a bit of a mini classic, and I should’ve realised both being technical fighters that was never really going to happen, it was just a good honest fight.

It just happens to be a fight where I disagree with the consensus.