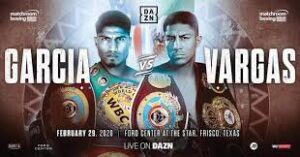 “Rules are meant to be be broken!…”

“That’s the exact opposite of what they’re meant for!”

It’s that quote from Deadpool 2 that stuck in my head when I rewatched footage of both Mikey Garcia and Jessie Vargas.

Jessie Vargas especially is not a fighter I rewatch regularly, I think “Jessie Vargas Knockouts” is up there with “best marking compilation” or “Gary Neville Highlights” in terms of YouTube searches.

Apologies if you don’t get that reference…

But you can’t ever say that either of these fighters never made the most out of their natural talent, with the fight between Vargas and Adrien Broner being the obvious showing of how working hard and being prepared to miss can narrow a talent gap, and for that fight I really did commend Vargas.

That being said though I don’t think I’ve ever rewatched it.

But with so many fans obsessed about “unorthodox fighters”, or fighters “doing everything wrong” its refreshing to have two fighters who have some respect for the book that is boxing technique.

I wont spend too long on this fight as I don’t think many boxing fans will be saying “that Wilder Fury fight was dramatic but what I am really interested in is Garcia Vargas”, so let’s go.

Looking at Garcia first, the most immediate word that comes to mind is “solid”. Boxer puncher, pressure fighter, inside fighter…none of these really describe how Garcia fights.

But if you want to learn how to get the most out of a pretty simple and basic toolkit Garcia is probably where I’d point you. He’s not razor fast or particularly strong but he’s a testament to where great hand position and educated feet can get you. Also, many fighters when they come and pressure tend to forget the jab, but like Golovkin Garcia both uses his jab and his feet to cut off the ring.

When I was thinking, “who’s the most similar fighter stylistically that I can think of” to Garcia?

Golovkin was in fact my answer.

Both show that you don’t need ape like arms to have a good jab or better, make use of a good jab, with good timing and no tell on the shots you can dominate a taller fighter using the jab, and then as such bring your other tools into the mix. Watch the Garcia Easter fight for a great showing of this. Garcia manoeuvred Easter all night, forcing him to move much faster than he wanted to, and of course when your opponent is thinking about the jab, that opens up so many more options yourself.

It’s funny though how one fight can change your whole career because I remember one pundit saying, I think it was Spencer Fearon, that if Loma Garcia was made he’d be picking Loma.

And while the fight is still interesting to me, this Garcia Vargas fight is one of the few times I’ve heard his name since the Spence fight, and may I just add, in a fight that I think should’ve been stopped.

I didn’t rewatch that fight in the leadup to this article, mainly because I really don’t see Vargas doing anything like the job on Garcia that Spence did, and more than that they are completely different fighters.

If I were to summarise Vargas, I’d say he’s a bigger but more rough version of Garcia. More traditionally Mexican if you will.

Nothing really stands out to me about Vargas to be honest. He’s fairly one handed I guess, especially up close, he really needs to vary up his combinations up close from the standard, left hook with his head to the right looking at the floor Danny Garcia style, but apart from that I don’t really have much to say.

He likes a jab to the body…

I really am struggling here can you tell.

Imagine the most standard fighter you can, add some Mexican style into the mix, and some basic long range bodywork and that is Jessie Vargas.

Don’t get me wrong I’m not discrediting the guy, he’s achieved way more in the sport than any of us has, but what I’m saying is that nothing stands out to me, good or bad, and that is really why he’s got so far, because he’s moulded his style to the book leaving no obvious flaws.

As for a prediction then, it’s pretty much style vs size, and for the record I think it will end up being a pretty good fight. I wouldn’t be surprised to see Vargas who stands 5 foot 11 try and use his range against the much shorter but much more skilled Garcia, who will try to time Vargas with up jabs and body attack raids, and I do see him succeeding with that tactic.

What I also see is as the fight progresses Vargas becoming more willing to engage as he both tires and begins to run out of ideas, and here I reckon we’ll see some very good back and forth action, as Vargas wins rounds through sheer activity and willpower against a Garcia who is clearly a class above but will have to deal with a man who clearly has the size advantage.

I will be surprised though if Vargas gets the win here, and to me 8 rounds to 4 for Garcia sounds about right, with Garcia taking the first few in technical affair, and the two going stroke for stroke in the second half when we see their Mexican sides come out.

It’s a fight that isn’t anywhere near the peak of the division but it may be among the best fights in the division this year.