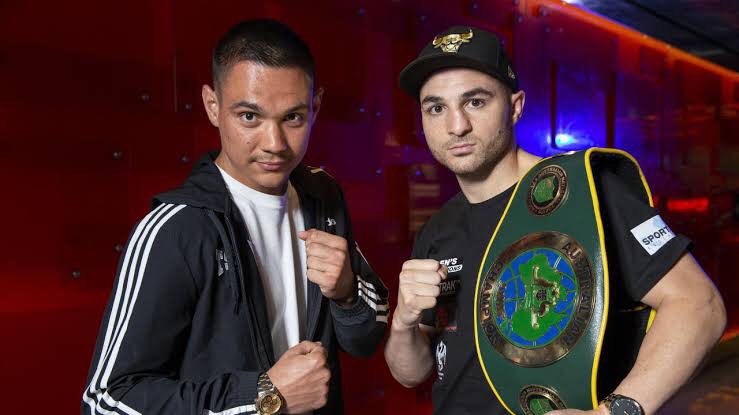 I had the opportunity last week, to speak with former Australian Super-Welterweight champ and middleweight contender, Joel Camilleri (18-6-1).

Firstly an apology to Joel, I spelt his name as Camerilli in my last article about him and this was incorrect and unprofessional of me.

Now back to the article, Joel has upcoming fight on the 21st of March, a middleweight contest for the Australian National Boxing Federation Australiasian Middleweight Title. His opponent will be Korobo Etto (7-1-2).

I asked Joel, what was it that got him into boxing?

“ I was always a competitive person, wanted to shine in the limelight. Growing up in Western Melbourne, a pretty rough area, we put on the gloves in the backyard, from there went to a kickboxing gym and did a little Muay Thai then switched to boxing.” He said.

Joel told me that after a move to Brisbane following his lost to Tim Tszyu, last year in May, Joel has obtained a new trainer and program.

“I moved to Brisbane to work with Jeff Horn and Dennis Hogan under Glenn Rushton for six months, had a fight had a win, but just didn’t feel right and made the move to Dundee Kim”. Joel said.

Joel’s last fight was a unanimous decision victory over former WBF Welterweight champ Samuel Colomban. The fight was a catch weight of 155lbs or 70.3kgs.

Joel also went into detail about his middleweight.

“My body is growing now I’m 29, I started eating healthy  and started a strength and conditioning, started to put on muscle, jumped on the scales at 80kgs, I thought it was a joke so I jumped on two and is was a little over 80kgs. So I thought you know what even making middleweight, as I still have to lose 7-8 kgs, that’s the perfect weight for me.” Joel explained.

He predicted against Etto that he is looking for the win a make a statement.

As with all my interviews with fighters, I asked Joel what was he most significant win and most devastating loss.

Joel answered with his win over Billy Limov to earn the Australian Super-Welterweight Title was his best win and his loss to Tim Tszyu to lose his title was his worst loss.

I moved the conversation to potential for Joel opponents after the Etto fight and dropped several names like Michael Zerafa and even Jeff Horn.

Joel told me that he doesn’t go after anyone in particular, just whoever makes sense at the time. He told me that while figters like  Zerafa and Horn would be great as Camilleri v anybody is would be a great fight, Mark Lucas and Wes Caper would also be on the list of potential opponents to see where he was at and move on from there, he is happy to fight anybody.

We moved onto the upcoming April 22 fight between Jeff Horn v Tim Tszyu, now officially going to be held in Townsville.

Being that Joel has fought Tszyu and sparred with Horn, there would be few fighters in the country that would understand the pair better.

I asked for his thoughts on the fight.

“If Jeff Horn could bring the same conditioning and the same kind of performance that he brought to the Pacquiao fight, then he going to make it very difficult for Tim Tszyu in the early rounds but in all honesty Tim Tszyu’s composure in our fight shocked me and to be to keep that composure through ten rounds and step it up at the end.

I truly believe that he has the best talent to become world champion. No one believes how hard Tim Tszyu can hit, that right hand can hurt someone if it lands.

“ Jeff Horn is the toughest guy I know, he will not back down, he won’t give up, he’s been hit by shots that should of killed people and he will not go down”.

In regards to Tszyu being the favourite for the fight, Joel said “Just watch the fight and see if they’re correct”.

As always I asked Joel who is his Mount Rushmore for Aussie boxing. He named Lester Ellis, Barry Michael, Lionel Rose and Anthony Mundine. He also added Jeff Fenech to the mix.

A very big thanks to Joel for giving me his time  for this interview.

As previously stated, Joel is fighting Korobo Etto for the ANBF Australiasian Middleweight Title, on March 21, at the Melbourne Pavilion in Flemington in Victoria. The event will be on Epicentre.tv streaming service.

My prediction a TKO victory for Camilleri, in the late rounds of the eight round contest.