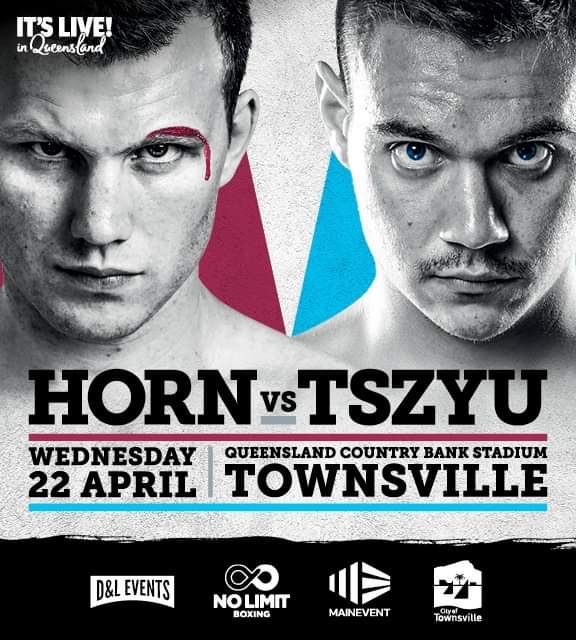 The upcoming epic clash between former WBO Welterweight champ Jeff Horn and second generation uprising star Tim Tszyu, to be held at the Queensland Country Bank Stadium, in Townsville on April 22, has been officially postponed, due to the corona virus outbreak.

First reported by the Townsville Bulletin on the weekend (the local newspaper of the city hosting the event) that the fight would be postponed.

On Monday morning Australian time, Prime Minister, Scott Morrison gave the direction that all events with 500 people or more would be either cancelled or postponed to contain the spread of the virus. This leading to a number of sports events including, the AFL Women’s, NRL and other sports events playing with no crowds or cancelled completely.

However later Monday morning, Jeff Horn, Foxtel Mainevent and D & L Events took to Facebook say that the fight was still on and tickets were available for purchase, leading to a lot of confusion regarding the status of the fight.

But I can now confirm that the fight has been officially postponed until further notice. No details of a new date have been given as this stage.

Along with Horn v Tszyu being postponed, other events for this Saturday have also been postponed. The National Boxing Series fight night, featuring upcomers Jai Opetaia and Brock Jarvis, that was to be held at the Hordern Pavilion in Sydney has only been postponed.

Along with postponements of other events, former Australian Super-Welterweight champ, Joel Camilleri’s (18-6-1) fight against Korobo Etto (7-1-2), for the ANBF Australiasian Middleweight Title, to be held at the Melbourne Pavilion in Flemington, this Saturday, March 21, has also been postponed.

I’ll keep you posted with updates regarding Horn v Tszyu.