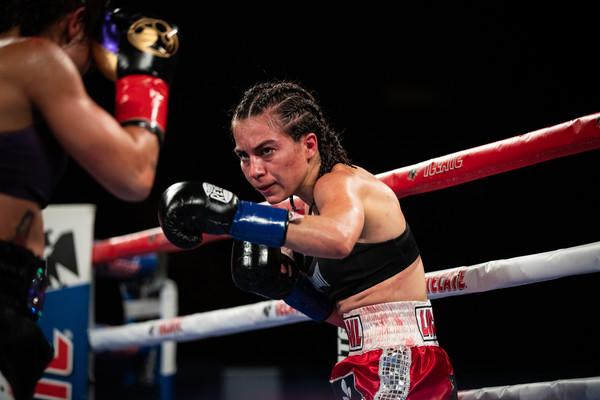 Australian boxer Dennis Hogan will not be the only Aussie boxer chasing a world title on the Charlo v Hogan fight event this weekend in Brooklyn.

Women’s Aussie fighter Louisa “Bang Bang” Hawton (9-2) will be chasing her second world title in as many divisions. Already earning the WBO Light-flyweight title in 2016, Hawton will drop down to the minimum weight limit division to attempt to obtain the Interim WBC minimum weight world title in a rematch with a fighter the Western Australian has already bested Lorraine Villalobos (4-2).

Hawton and Villalobos fought the same time last year with Villalobos having to retire, but has had two ko victories in 2019, while Hawton has remained inactive for the year until now.

The winner will hopefully get a shot a current WBC minimum-weight champ, Germany fighter, Tina Rupprechtith (9-0-1).  Rupprechtith will be in her fourth defence of her title on the 21st of this month against Catalina Diaz (6-2).

Although there are other Aussie fighters like Laurn Eagle (who has another fight coming on the 21st of this month) and Tayla Harris who focus mainly of domestic fights, it’s excellent to she that there’s a woman fighter flying the Australian flag on an international level.

Hawton spoke at the final press conference before the fight, saying how excited she was to fight in New York. The Action will be broadcast on Australia’s Foxsports Channel 507 from 1pm AESDT This Sunday.

Here is the full press conference