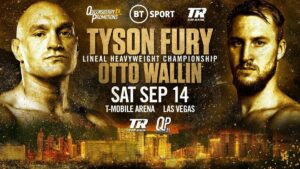 Tyson Fury versus Otto Wallin is one of those fights that I have zero interest in actually watching, it kind of reminds me of those David Haye fights when he was on his come back trail. However, in a few ways it’s actually worse than the Haye fights.

I’ll say this before I go off on a complete rant that I actually do like Fury in the ring, but out of the ring he just frustrates me more than anything. It’s not for his “controversial” views but ironically in a similar way to David Haye, Fury has a knack for contradicting himself and criticising others while he is in no way taking as many chances as them.

As examples, let’s say all the criticism against Joshua following Fury’s absence from the sport, calling him a “paper champion” despite the fact winning the belts against two champions, and claiming that the first Wider fight was the easiest fight in the world to get made since two champions want to face each other (a dig at Joshua) despite the fact the fight actually took months to make. So, you can understand my scepticism when Fury says that the Wilder rematch is already signed and sealed, especially since the timing is oddly convenient to potentially help sell tickets for this fight.

Now we move to his claim as the lineal heavyweight champion, my biggest problem with Fury. The general public believes that the lineal heavyweight title is a title that runs all the way back to John L Sullivan, the first world heavyweight champion in 1882. However, that is only partly right, there have been breaks in the lineage, most obviously between the Lennox Lewis and Klitschko brothers era. Lewis did retire with the lineal title and as such it was basically just given to Wladamir due to a consensus, there isn’t any hard rules if a fighter such as Lewis retires with the title. As such when Fury says “I beat the man who beat the man who beat the man…” he really only beat the man, and finally I’ll say that this mythical lineal title has no mandatories, no rules, no minimum activity, you can basically do what you want and fight who you want. As such I think you can make a good argument that while Fury was out of the ring for over two and a half years that Anthony Joshua established himself as the new top heavyweight and as such he should’ve been crowned lineal title holder, since Fury wasn’t exactly to be coming back to the sport any time soon.

Fury holding this lineal title isn’t completely wrong, but you can see my annoyance with him holding up this mystical title, criticising others holding actual titles and defending his “title” against extremely poor opposition, it just leaves a bit of a sour taste in the mouth.

Now to the actual fight. I did actually watch the only three fights on the internet of Wallin and to be honest he doesn’t look terrible. If I were to breakdown his style I’d say he fights like an extremely poor man’s heavyweight Errol Spence. High guard from the southpaw stance with an emphasis on the left hook to the body up close when a clinch looks to be initiated. What I would say is going to be his downfall against a fighter like Fury is how rigid he is. Wallin’s high guard looks pretty static and against Fury who looks to double feint, jab and then hook around it he’s going to make mincemeat out of that guard. Wallin also seems to come move pretty much in straight lines, there’s not too much nuance with how he goes about his work, it’s come in jab, left hooks to the body or upstairs with little to no head movement. Fury should easily get the job done here; I think in three rounds.

I could go properly in depth here about why Fury has the skills to beat Wallin about the fact he’s a switch hitter, his upper body movement etc but to be honest it’s a nothing fight for Fury, and despite how many times he goes on about saying how in heavyweight boxing anything can happen and he’s a dangerous opponent, he won’t convince me that this is anything less than a complete cherry pick tune up fight.