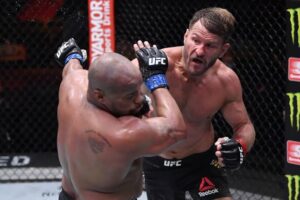 Former Two Division champion (Heavy and Light-heavyweight) Daniel Cormier (23-2-0-1NC), career looks to be all but over,as he had an unsuccessful attempt to regain his crown after a second defeat by current heavyweight champion Stipe Miocic.

In a battle that interesting enough did not go to the ground, both men received eye pokes with Miocic in the first round and Cormier in the third. Despite his best efforts, Cormier was held at bay by the current champ, who out striked and controlled the pace of the fight more by holding Cormier against the cage of the octagon.  Although both men were rattled by the other striking in the fight, especially Miocic rocking Cormier in the closing stages of the second round, neither man was able to follow up and finish off their opponent.

After the end of final bell Miocic was given the unanimous points decision, with the judges scorecards, reading 49-46 x2, 48-47, with all three in favour of Miocic. In the post fight interview with Joe Rogan, Cormier made reference to his eye, that he could not see with his right eye after the third round. Although disappointed with the incident, Cormier said “It is what it is”. In regards to his future, Corimer said that he would only continue fighting if there was another title shot in the mix and that he did not believe that there would be another shot for him in the future.

Without directly saying it, Cormier is firmly looking down the barrel of retirement. But with his career, his next step would be right into the Hall of Fame.

Cormier’s UFC career, leaves and legacy of being only the second fighter in UFC history to hold two division belts simultaneously (Light-heavy and Heavyweight), the first being Connor McGregor (Feather and Lightweight) and the man that stopped Stipe Miocic’s record breaking three title defences as the heavyweight champion. Cormier’s UFC record is now 10-3-1NC that includes  six Light-heavyweight title fights , including four successful defences as the champion, and four heavyweight title fights, including one successful defence as champion.

As for Miocic now 20-3, he regains his status as the most successful champ in heavyweight history, and awaits a rematch with heavy hitting Francis Ngannou.

Click the link below for Tstreet Controversy’s review video of the fight.