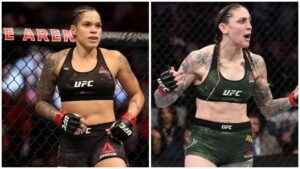 Coming in to the fight with a record of 11-4, Anderson who is originally from Gold Coast, Queensland, Australia, now living in the USA, was little to no opposition for Nunes, who has virtually all but cleared out the Featherweight division.

It only took 2 minutes for Nunes to submit Anderson by triangular arm bar, which is rare as Nunes only has four submission wins on hr resume with the last being almost five years ago against Meisha Tate at UFC 200.

To her credit, Anderson can hold her head high, knowing that she lasted longer with Nunes then former champs Ronda Rousey (48 seconds) and Cris Cyborg (51 seconds) combined.

Nunes celebrated in the ring with her beautiful daughter, Anderson embraced both mother and child in a touching beautiful moment for the UFC. In post fight interview, Nunes said the Lioness was more dangerous now she is a mother.

The only question remains, what of the Featherweight division and who can defeat Amanda Nunes the G.O.A.T.

Check out the link for Tstreet’s thought on the fight with the Nunes post fight interview.